Sarod maestro Ustad Amjad Ali Khan and his sons Amaan Ali Bangash and Ayaan Ali Bangash in collaboration with legendary American guitarist and Grammy award winner Joe Walsh, mesmerise music lovers with a three-song EP launched on June 4. The project titled Prayers — East Meets West is a tribute to doctors and frontline workers worldwide, along with a prayer embracing ‘Black Lives Matter’. While celebrating the diversity of genres, their music heralds a message of love, unity, and peace, especially in these troubling times. Prior to the EP launch, the sarod maestro in an email interview shares details and why this project “guided by music’s unseen power” is special. “We didn’t have a plan but knew something profound would come out of this,” he says adding the proceeds from the EP’s sales will be donated to IntraHealth International to aid health workers.

How did the Prayers – East Meets West take off?

Joe (Joe Walsh) and I met in Mumbai in 2018 and were keen to do something together. During my US tours, we used to record in Joe’s beautiful studio in Los Angeles. Our two sessions, spread over a year, became my first musical partnership with the Rock and Roll world. It’s been an honour to collaborate with Joe who is a legendary figure. This project is a spiritually infused three-song EP, an offering for the widespread human suffering. We met again in Los Angeles and recorded these pieces before the lockdown in early 2020.

Can you tell us about the album?

Do you believe these pieces will bring calmat a time when the COVID-19 second wave has wreaked havoc in India?

Prayershas come to fruition at a time when humanity needs meditation and contemplation more than ever. I’m glad I’m able to contribute in my humble way to bring serenity and peace. While I pray for the world to heal and overcome this crisis, I feel this a huge lesson for us. I believe we will come out of it as better versions of ourselves. I wish music shapes the consciousness in a way that it contributes to oneness in children; it must be more practical and less theoretic! 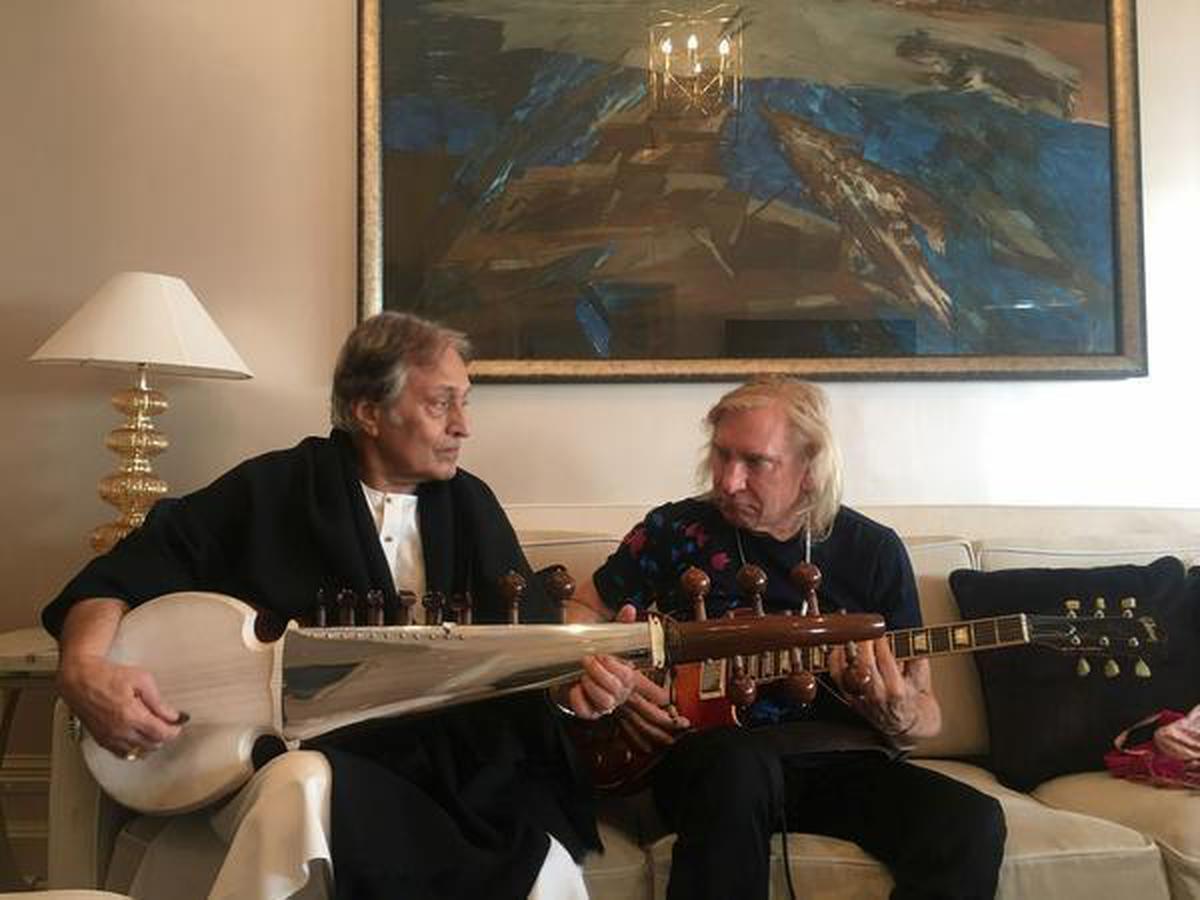 You performed virtually with your sons Amaan and Ayaan for Joe Walsh’s annual charity concert on December 12, 2020. Can you share your experience of collaborating with him?

It was an honour to [virtually] participate in VetsAid, Joe Walsh’s non-profit veterans’ organisation on December 12. The proceeds from VetsAid 2020 will go to veterans’ services charities, chosen through a vetting process in collaboration with the Combined Arms Institute. It was wonderful to be part of a concert that also featured Eddie Vedder, Alice Cooper, Willie Nelson, Brandon Flowers and James Hetfield.

Your collaborations with Western musicians began in 2009, with renowned conductor David Murphy. Considering the differences in Indian classical and western classical performances, were you wary of how these disciplines could merge fruitfully?

I was honoured when the Scottish Chamber Orchestra approached me to write a Sarod Concerto in 2009. Noted conductor David Murphy from the UK was to conduct the entire concerto. ‘Samagam’premièred very recently in the month of June in the Orkney Islands in Scotland at the St. Magnus Festival. The idea was to share the unique treasures of our artistic traditions and find a common ground in ragas and medieval modes. The aim is to preserve the essence of Indian and Western traditions and explore the musical DNA of these two traditions. The Sarod Concerto has been performed by Orchestre de National, London Philharmonia, Britten Sinfonia, Welsh National Opera, Chicago Philharmonic Orchestra, Norwegian Radio Orchestra, Gulbenkian Orchestra, Adelaide Symphony Orchestra, Provence Symphonic Orchestra, New Jersey Symphony Orchestra and the Taipei Chinese Orchestra.

You recently gifted a folk music piece to Assam on Bihu. Any special memories of the State?

I have been visiting Assam since the ’70s, even before my marriage to Subhalakshmi Borooah, a Bharatnatyam dancer whose family belonged here. I have travelled by road many times from Guwahati to Sibsagar (Subhalakshmi’s home town). The long drive takes around eight hours else the short distance is between Sibsagar, Jorhat and Dibrugarh. Once, I was walking in Sibsagar when I heard the mild sounds of drums. I was told that it is coming from Naamghar. a place where one can worship any god or goddess. I have seen Assam during its beautiful period and have visited tea gardens, especially the ones owned by my in-laws, PC Borooah and Parsuram Borooah. My father-in-law Parsuram Borooah was the first hero of Assamese films starting with Joymati. His elder brother PC Borooah was the first Assamese singer to have been recorded by The Gramophone Company.

How have you been spending time during the pandemic?

I teach my grandchildren Zohaan and Abeer. I have been able to forge a deeper connection with music, with less distractions and no travelling. I have certainly been able to meditate with music in a profound manner.

I hope peace and oneness prevails and the world moves towards hope and inspiration.

‘If you can speak, you should sing,’ says T.V. Gopalakrishnan

Thailand’s leading youth orchestra takes to filmmaking during the lockdown

Chinmayi, live on Twitter: How the singer’s Spaces concerts altered people’s perception of her

Chithra and other Malayalam playback singers’ melodious tribute to SPB

A series of young singers

Amrit Ramnath: ‘Though I respond to other forms, Carnatic music is my core’